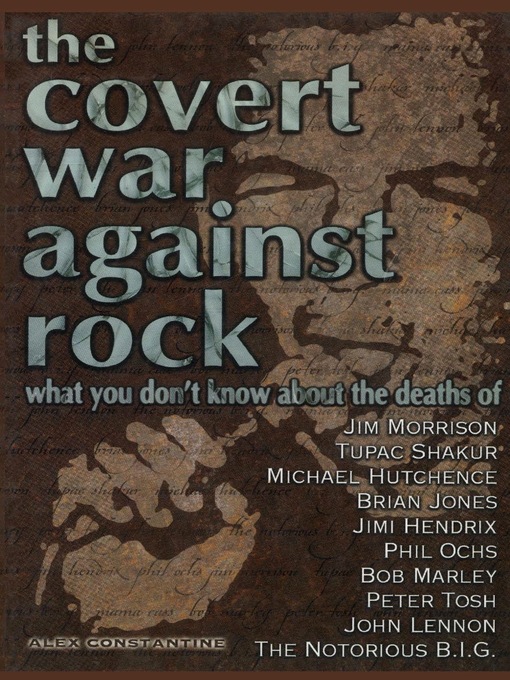 The covert war against rock what you don't know about the deaths of Jim Morrison, Tupac Shakur, Michael Hutchence, Brian Jones

Who kills the rock stars?

Acknowledgments; Foreword; PRELUDE Assasination War Politics of the Vietnam War Period; 1 A Killing Field Day for the Heat; 2 Time Machine: The Birth of Top 40 Radio and Alan Freed's Near-Death Experience; 3 Parapolitical Stars in the Dope Show; 4 The Death of Cass Elliot and Other "Restless Youth"; 5 A Murder in the House of Pooh: Brian Jones; 6 Portraits in Carnage: The End of the Rock Festivals; 7 I Don't Live Today: The Jimi Hendrix Political Harassment, Kidnap and Murder Experience; 8 When You're a Stranger: Investigative Findings on the Death of Jim Morrison. 9 Like Coffins in a Cage: The Baez Contras and the Death of Phil Ochs10 Who Killed the Kennedys? (and Sal Mineo?); 11 Project Walrus and Holden Caulfield's Warm Gun; 12 What'cha Gonna Do? ... The Deaths of Bob Marley and Peter Tosh; 13 Gang War: Sons of CHAOS vs. Thugs
A Tupac Shakur and Notorious B.I.G. Assassination Digest; 14 Dancing on the Hetty: The Death of Michael Hutchence, et al.