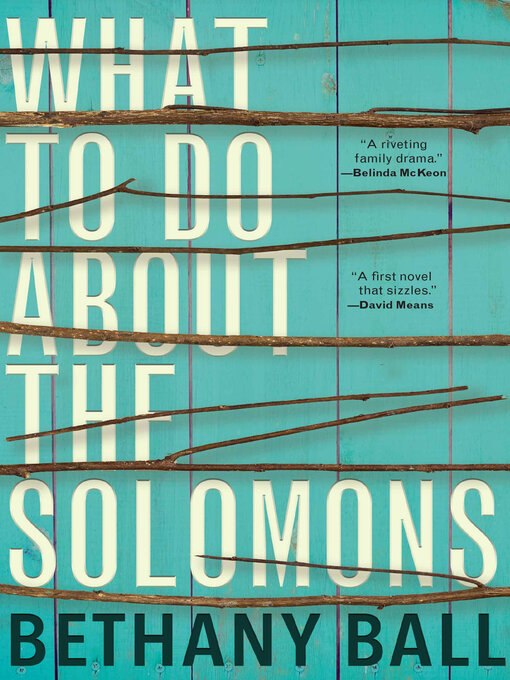 What to do about the Solomons

"From a remarkable new voice in fiction, Bethany Ball, comes a transporting debut; a hilarious multigenerational family saga set in Israel, New York, and Los Angeles that explores the secrets and gossip-filled lives of a kibbutz community near Jerusalem. Meet Marc Solomon, an Israeli ex-Navy commando now living in L.A., who is falsely accused of money laundering through his asset management firm. As the Solomons' Santa Monica home is raided, Marc's American wife, Carolyn -- concealing her own dark past -- makes hopeless attempts to hold their family of five together. But news of the scandal makes its way from America to the rest of the Solomon clan on the kibbutz in the Jordan River Valley. There we encounter various members of the family and the community -- from Marc's self-absorbed movie actress sister, Shira, and her forgotten son Joseph; to his rich and powerful construction magnate father, Yakov; to his former star-crossed love, Maya; and his brother-in-law Guy Gever, a local ranger turned "artist." As the secrets and rumors of the kibbutz are revealed through various memories and tales, we witness the things that keep the Solomons together, and those that tear them apart. Reminiscent of Nathan Englander's For the Relief of Unbearable Urges and Jennifer Egan's A Visit from the Goon Squad, and told with razor-sharp humor and elegant acuity, What to Do About the Solomons is an exhilarating first book from a bright new star in fiction"--